Home Pregnancy Labor, Delivery & Miscarriages What Is A Mucus Plug?

Losing mucus plug signals arrival of your baby. Understanding the importance of cervical mucus (CM) plug during pregnancy will help you overcome the disgust.

What is a Mucus Plug? Does losing your mucus plug mean onset of labor?

All mucus plug FAQs answered uncensored in one single post to read alone!

What is a mucus plug?

The mucus plug is literally a seal that covers the mouth of the cervix to prevent anything entering and coming out. During the seven weeks pregnant the plug lodges in the cervical neck and stays until labor.

Once your body prepares to go into labor, the plug comes off to open the birth canal.

One of the signs of the onset of labor is losing your mucus plug. But it is not as crucial as pregnant water leaking or strong contractions. Some women wait for weeks or days after losing their CM plug to go in labor.

It is not necessary that you get a clear mucus plug. The plug color can be white or yellow. Bloody show is the plug coming off with pink or brown color blood.

Where do you get the mucus plug form?

There are many mucus glands already present in the cervix. Just like BBT, the cervical mucus changes during phases of the menstrual cycle.

During pregnancy, the cervix mucus glands secrete thick cheesy discharge that blocks the mouth. Early pregnancy mucus plug is not as watery because your pregnant water is still adding up.

By the time you are 7 weeks pregnant the CM plug forms and protects your baby.

Sex during pregnancy is safe because of this seal that prevents any foreign entry into the baby’s castle. Not only physically but the plug also prevents infections and bacteria.

Cervical mucus plug comes off just before your body starts preparing to go into labor. Don’t confuse it with the time when you start feeling labor pain. Your body’s onset of labor is not sudden enough.

The levels of labor inducing hormones start rising in the last few weeks of the third trimester. So, losing your plug can happen sometime before your actual labor begins.

Mucus plug during pregnancy completely forms by the end of 12 weeks. Mucus plug vs discharge is clear as the latter changes during the course of a month.

During pregnancy, the hormones don’t allow the mucus to become fluid.

The normal discharge does not stay in your cervix for long. Mucus plug or discharge is thick, and a lot of it comes up.

Mucus plug pictures show you all shades of discharge. Which one of them is normal – Clear or Bloody mucus plug? All of them!

Depending on your condition the mucus plug can be yellow, creme, white or brown. There can be blood in CM  plug giving it a pink tinge or brown discharge look.

Size of the plug is nearly 4 cm, equal to the width of the cervix. As the cervix dilates near labor, the hold of plug loosens, and it comes off.

Normally cervical mucus is very less in amount, but plug volume is nearly two tablespoons. It may not come off altogether, so don’t panic if you see small amounts of plug coming out.

What does the mucus plug do?

The function of the mucus plug is to protect the baby from bacteria that could enter the cervix. Lysozyme or bacteria destroying chemicals in the mucus break the walls of infectious agents.

The CM plug keeps getting more mucus from the cervix. Rising levels of estrogen cause an increase in the activity of cervix secretions.

The pool of mucus and secretions caps the uterus path to the baby. Thus it protects him when you have sex from jerks too.

When do you lose your mucus plug?

Losing the mucus plug must happen when cervical dilation occurs. The first sign of approaching labor is the plug coming out and not vice versa.

Mucus plug early pregnancy may come out if you poke finger which you must never. Shocking but mucus seal can regenerate itself in the earlier stages of your pregnancy.

Your doula or OB will question you about losing your plug. But even after it comes out, it is not necessary that you have to rush to the hospital.

Commonly 37 weeks pregnant woman loses her plug soon after she crosses the week. If you lose yours earlier, do tell your doctor as it may hint preterm labor and delivery.

Another concern is the exposure of the baby to external infectious agents after the opening of the cervix. Consult your doctor if you are doubtful about your plug coming out early.

Mucus plug can come out after sexual intercourse or vaginal examination. Body replenishes the lost with fresh plug throughout pregnancy.

What does it mean when the mucus plug comes off?

As the body prepares to go into labor, the cervix effaces and dilates. The effaced cervix is thinner and softens. The grip of plug falls, and it comes out.

Naturally, the signs mean that your body is on the threshold of labor. It is not possible that you go into labor or cervix dilates without fall off the plug.

What causes the loss of the mucus plug?

Increase in oxytocin levels during the last stages of pregnancy is responsible for the onset of labor. Hormonal changes and dilation of the cervix are two significant causes of mucus plug falling out.

Why will you lose your mucus plug?

When all that the mucus plug does, is protect your baby, why do you need to lose it? Well, logic! The seal needs to clear the path for the baby to come out.

Conversely, when the baby descends into your lower pelvic region, the gushing fluids push off the plug.

The increase in pressure in the area effaces the cervix and softens the lining. Eventually, the plug comes off the cervix.

Capillaries and tiny blood vessels may not be able to withstand the pressure and leak. Pink mucus plug with blood is because of this reason.

How does the mucus plug come out?

It is not necessary that you will see something similar to the cork of a bottle. Mucus plug can come out in pieces over the course of time nearing labor.

Women pregnant for the second time will be familiar with the bloody show. But to their surprise this time they might get mucus plug and no blood. Why? It is because the cervix is slightly wider or flexible than before, from the previous delivery.

How will you know whether you lost your mucus plug?

Your friend might tell you how her CM plug came off and she went into labor. Weeing and increased vaginal discharge give you a wet feeling in the area round the clock. Perhaps in your case, you may skip noticing the plug coming off.

Also sometimes the plug comes out in pieces, and you assume it to be normal vaginal discharge.

Mucus plug can come out when you are taking a shower or in the loo. You may see parts of it on your midwife’s gloves.

But it is nothing to bother yourself about. The mucus cervix plug has got undue popularity due to old wives tales about natural ways to induce labor.

The primary function of the mucus plug is the protection of the baby during early pregnancy.

You must call the doctor if the plug comes off early due to the low lying baby.

How long after losing my mucus plug will labor begin?

There is no rule of the thumb about when will labor begin after mucus plug comes out. Some reports state women losing their plug 6 weeks before going into labor.

Typically a woman can take hours, days and weeks to go into labor after plug comes out.

Stripping membranes or vaginal exam after 37 weeks can cause loss of plug during pregnancy.

A tissue wipe or swiping motion over the vagina can cause the plug to shake off. Undoubtedly natural labor has nothing to do with a tissue wipe!

When a woman doesn’t go into labor despite past the due date, doctors employ such artificial methods to induce labor.

How to remove mucus plug for going in labor?

After seeing all the mucus plug pictures, you want to check yours. Maybe you are past the 37-week mark and are curious.

In reality, the removal of the mucus plug does no good for inducing labor. Interrupting the natural course of things is always a thing to refrain.

If you’re past your due date, then your doctor will consider giving Pitocin shots for inducing labor.

Avoid trying to remove your plug yourself whatsoever be the reason.

What to do after you lose your mucus plug?

Generally, if your mucus seal parts come out during early pregnancy fresh mucus would reseal. But if that doesn’t occur and you experience smelly mucus during pregnancy or itching then consult your doctor.

When should I call the doctor after losing CM plug? On the other hand, if contractions and other symptoms are co-occurring along with the loss of CM plug then inform your doula or OB.

What happens if you lose your mucus plug early in pregnancy?

As said before your body is capable of regenerating the mucus plug if you lose it in early pregnancy. Vaginal exam and intercourse can jerk off the CM plug.

You can inform your doula or midwife about it, but there is nothing to worry.

But if you see a lot of blood or experience pain along with mucus discharge during pregnancy, consult your doc.

There is a risk of infection if you lose mucus seal earlier in pregnancy and it doesn’t form back.

Are mucus plug and bloody show the same things?

Bloody show is an informal term for blood coming out of vagina along with mucus. It could be because of vaginal examination or sexual intercourse.

Mucus discharge can cause bloody show if the capillaries burst due to pressure.

The two terms are not the same. But they refer to vaginal discharge during pregnancy. If there is blood coming with mucus, then it is a bloody show. Home birth: Can I give birth at home? How To Create A Birth Plan: FREE Birth Plan Template 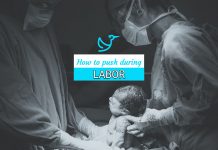